Key:
Blue - Both of us
Purple - Kelly
Orange - John

A mixed year for me. London Marathon training was hampered with my first major injury for a number of years - Plantar Fasciitis. I managed to recover from that during a painful and frustrating 3 month period. I then began training for my autumn marathon - Chester. I had a really strong 10 weeks of training which meant that I was feeling confident for my sub 3 goal. I didn't quite manage sub 3 but I did get a new PB of 3:00:51. I then went on to run the Snowdonia Marathon with John which was one of the highlights of my year.

After PBing in every distance in 2017, 2018 has been less successful. I've ran loads of other races and had some good performances but nothing major as, for many of them, I was injured or recovering from injury. Chester has my only PB this year.

1) - Complete the right races to gain enough points to enter the UTMB ballot. (The Ultra-trail du Mont-Blanc is a 100mile trail race across the Alps in France.)
My goal was shared with fellow club mates Cat and Gary and we all attempted to qualify together. The races we chose which allowed us the necessary points were: The Butcombe Ultra (50 hilly miles around the Mendips), The Ring of Fire (Running around - 130 miles - Anglesey over 3 days) and the Cotswold Way 100 (Chipping Camden to Bath - in one go!) Some epic ups & downs, covered throughout previous blogs, but we did it! We've entered the ballot and find out our fate on 10th January at 10 AM - the suspense is killing me!


2) - To run every day for a year - a minimum of 5K. Something I have always wanted to do. I love to exercise and stay healthy/counteract my beer consumption, especially by running! I was initially inspired by club mate Big Kev who completed his mission back in 2014. Big Kev is an awesome runner in his own right but also works full time, has a family, lots of commitments etc he made me wanna have a go! So I did, in 2015... and I failed - I got to 250-something days and was constantly running too far and too fast. I didn't respect my body, choosing the excitement of running as fast as possible over the benefits of taking it steady and exercising every day. More inspiration came from the creator of Kx365, Jim Gump. He ran 45+ miles yesterday, continuing his streak of running every day for 6+ years - a legend in the running world! Inspired, but not enough to have another go until 2018... 2017, another club mate Woody took on the challenge. Wanting to run more and improve quickly, he followed advice from the Maestro to  - give it a go. And he did, January passed, Feb, March etc and Woody kept getting faster and faster, smashing PBs in every distance. Not only that, with friends around him, in awe and always willing to give advice, he managed his project and looked after himself and got to December the 31st in good health and competed his challenge. Legend. Inspired once more. 2018 begins and my diary is open. Time to write some targets. I wanna run every day. I run the idea past the boss (KD) who as always is full of more positivity and enthusiasm than a state of cheerleaders and I get the nod. On top of the lengthy and challenging races planned to qualify for the UTMB balance, this was gonna be a challenge, but I'm older, wiser, less excited by running fast than I was back in 2015! The first half of the year was relatively straight forward. A disappointing time at London Marathon and a back niggle which led to a week of 12minute-mile running around the block were the only negatives in an otherwise very run and continuous 6 months of run streaking. The second half of the year was when all the big races were... Never has a run been more difficult than the day after Ring of Fire... after 3 days and 130 miles of 10000+ feet of up and down coastal trails, my body hated me. Kelly had to almost carry me around the block, but I did it and I kept doing it. I got stronger and recovered quickly... Quickly enough to 3 weeks later run the Cotswold Way... 100 miles... Never has a run been more difficult than the day after the Cotsold Way... 100 miles... Again, Kelly helped me round the block and I kept running. Every day. I got to December and I had the UTMB points and I could see the light at the end of the tunnel. the 31st of December wasn't far away... like most things, especially targets/goals, it's the last bit which is tough... Honestly, I couldn't be bothered to run. Every day it was dark and cold, Christmas was coming and I was getting fat. Pre-hibernation like bingeing meant I was slow and not particularly wanting to run... BUT I DID. I kept running... every day. 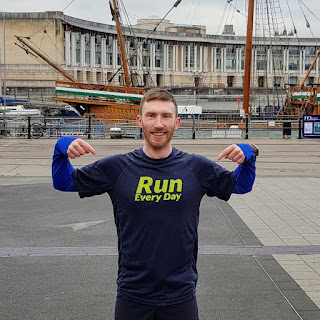 
A massive achievement for me. I love running, I've wanted to run every day for a year since 2015 and I did it.

People keep asking/telling me - Am I gonna stop? - Stop?!... I'm not sure at the moment. I've completed my challenge, I don't need to carry on. Since December (all of one day...) my mojo has come back a little... After a really nice Christmas, ringing in the New Year with great friends and a double parkrun this morning - I quite like running again... What will decide my streak ending will be me. If something comes up, if I wake up and can't be bothered, if I feel an injury or niggle coming on. I'll stop. I'm not worried about my health, or should I say I don't think what I have done has been detrimental to my health. I think we should all exercise in some way or another, every day. I chose running because I like it love it and if you're sensible it causes very little harm and an awful lot of good.

Many thanks to my friends and family for the epic support this year. The Maestro for being the running guru and always offering the best advise at the right times. Cat for inspiring me to run 100 miles, qualify for UTMB and sacrificing a weekend to help me run the Cotswolds. Biggest thanks goes to KD. She loves running more than me, more than most people. Importantly she loves to get things done! My moods and general personality mean I can be difficult... some times. I usually take it out on what I love... so KD and running... a few times through the year I tried to sabotage my dream... KD was always there, nudging me to get my trainers on and plod another 5K - for this saint like patience and perseverance I am eternally grateful - thank you. X

Everyone is setting goals this time of year and why not? We've just had a nice bit of time of and plenty of time to reflect. Why not go and run every day for a year? 1 mile.

After much deliberation, I've decided not to run a spring marathon this year. This is for a number of reasons:

1) I've never had a good spring marathon (Brighton 2015 (injured), Boston 2017 (hot), London 2018 (hot and injured!). My autumn ones have always been more successful. Why? Probably partly due to the more predictable weather conditions; (we rarely have a scorching hot October!); party due to me being a teacher and having 6 weeks as a full time athlete over the summer; also, I tend to get injured more during the winter - this could be linked to the weather and getting colds or perhaps muscles are more likely to break or get damaged in the cold if they've not been properly warmed up?! (Doctors, physios or health professionals has this been proven?)

2) I really want to improve my 10k and half marathon PBs.

3) In 2016, I didn't do a marathon and focused on the shorter races and had a really successful year of PBs.

4) I'm hoping that having the spring off and improving my speed over short distances will help me in the autumn when I go back to marathon training.

Ashton Court parkrun
2018 has been the first year, since I started parkrun, that I haven't had an Ashton Court PB. This has annoyed me. I will rectify this next year! My aim initially is to go Sub 20 (I've done this 3 times but not for over a year). Then, ideally, I'd like to improve my PB of 19:50.

Weston Prom 5 mile
For aaaaggeeeesss, I've wanted to get under 30 minutes at Prom. Hopefully, with the half and 10k training, I'll be able to achieve this in 2019.

Half Marathon
This going to be my main focus for the next 10 weeks. Starting from Monday 7th, I'm going to start my half marathon training for the Bath Half. My current PB is 1:25:31 which I set in the Bristol Half in 2017. I'd like to go sub 1:25 in Bath and then hopefully better that again at the Bristol Half to start getting closer to 1:20.

I've written my own training plan this time. I've not written my own plan before- in the past I've followed P and D or John's plan. I'm using the knowledge I've gained from previous plans alongside knowing my body better and what it can handle. I'm desperate not to get injured so every Monday will be a rest day with a Personal Training (PT) session and then Yoga in the evening. I'll aim to do speed work every Tuesday. I'm going to try out the Bristol and West Whitehall track interval sessions. I'll try to do parkrun as often as I can and then also include 2 medium long runs a week of between 8 and 15 miles. The other days will be 5k recovery runs around the Harbourside. I'm prepared to take more rest days if needed. I'll be paying close attention to my feet and how they feel. My weekly mileage won't be too high (after running Chester off 40 - 50 miles a week, I feel that I'm able to achieve results without super high mileage - higher mileage = greater risk of injury) probably around 30 - 40 miles a week. I've missed the structure of a plan over the last few months so really looking forward to getting started.

Marathon
Obviously I can't go a whole year without doing a marathon! In the Autumn, I'm planning on running the Abingdon Marathon. My goal will be to smash Sub 3 out of the park and get closer to 2:55. 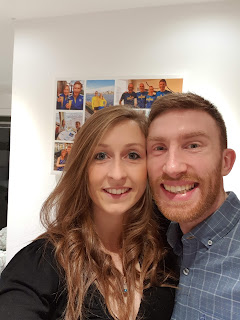 Thank you to everyone who has been following our progress during 2018. We hope you'll continue to read our blogs in 2019. Do let us know your targets and goals as well. It's great when we can all inspire and encourage each other.

Posted by Glutenfreerunninggirl at 12:48 PM 2 comments: