Week 1 of training - successful races and a gluten attack.

Key
Kelly  - Purple
John - Orange
Both us us - Blue

We started marathon training in the best possible way - with a rest day!

After both finishing first at Ashton Court parkrun on Saturday, I feel like we deserved it.

I went to see the Spice Girls tonight! Despite a torrential downpour, we had a great time. Lots of dancing!

A rest day from running for me also - 10 very wet miles on the bike which included commuting to and from work and going to mum's for dinner.
Start re-reading Endure by Alex Hutchinson. A book of science and stories from lots of different sports all relating to endurance - appropriate and hopefully helpful education for the marathon campaign.

Clevedon 10k today. Wasn't really sure how I would feel today after Spice Girls last night. I was pretty tired but had a large bowl of pasta for lunch in the hope that that would revive me. It wasn't enough for a great performance but I managed a good one. 40:55 was my finish time which I don't think is too bad considering. It is 3 minutes off my PB though...but I'll call it 6 miles at sub marathon pace! 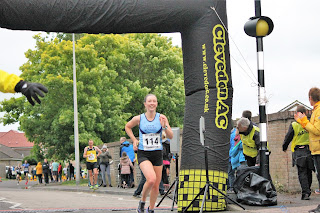 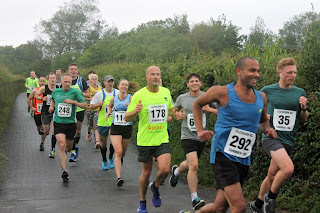 A good effort from KD after a grueling evening of horrendous weather and time on feat - who knows what damage she did to her ears as well!
Similarly well fuelled throughout the day; overnight (morning!) oats, sweet pots with cheese and salad and a banana a couple of hours before the race. Conditions weren't great with it being wet and a strong (but warm) breeze - but I was feeling good and keen after 10-days-or-so of good running and eating. Previous 10K efforts this year have resulted in 35:42 & 35:43 at Cardiff and Bristol so I was really keen to break the 35:3x mark and get as close to a PB (34:42) as possible.
10th place with 35:27 - well chuffed! A big effort in the first half left me hanging on a bit in the second half, running into a strong headwind solo throughout - glad to cross the line and very happy with the time. A great start to marathon training and a good way of ticking the lactate threshold session box for the week! 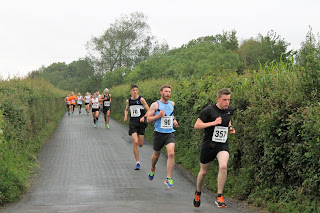 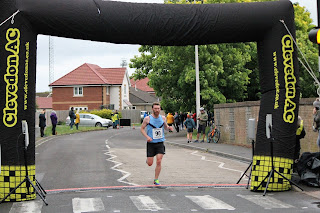 Proper training started today. We were up at 5:15am to do 10miles. After Clevedon last night, I was expected this to be really painful but actually I felt pretty good; isn't the body strange sometimes!?
10 miles at an average of 7:58mm chatting the whole time.
The only negative was that I then felt hungry all day and ate a LOT of food!

A busy evening planned - we were keen to get this one out the way. 10 steady miles turned into a quicker turn around than expected. Considering we'd raced 12-hours before and it was silly-o'clock in the morning - 10 Miles in Sub80 mins is pretty good going - a great way to start the day and just reward was two pieces of toast as well as the usual porridge.
A pleasant evening of piano lesson, Towpath admin and Killing eve ensued before a much needed early night. Hard-core.

Really had to drag myself out of the door today. If John hadn't encouraged it, I definitely wouldn't have ran today - a real benefit of having a partner who runs too. We just did a steady 5 miles recovery.

Agreed - it would have been very easy to have shrugged this one off - the last few late nights and starting training were starting to catch up... Once we were a couple of miles in, chatting away debriefing the day with one another, we were both glad we did it though. It did the legs and the brain some good to spin the legs for 5 miles Recovery @ 9MM pace.

First 'lie in' of the week - 7am! Had a good healthy day and ate a gluten free lentil curry for lunch; fueling for the Towpath 10k later.

It rained and rained all day...the last thing I felt like doing was organising and then running a race in the pouring rain. It was so bad at times, during the day, that I wondered if anyone would turn up at all!
Surprisingly, we had over 110 runners! The Towpath was very puddley and I'd raced earlier that week so I wasn't expecting much from tonight's race. I started off nice and steadily and ran and chatted with Robyn for a bit (she beat me in the last Towpath a couple of weeks ago). After the fist mile, I was actually feeling pretty good so decided to push on - I did joke that Robyn would probably catch me later...(spoiler alert - she did!).

I've been trying a new race strategy lately: not looking at my watch during each mile and running to feel. This is on John's advice. I'm hoping it will help me to push myself more and also get into more of a rhythm rather than constantly adapting my pace to hit my target. So, I set my watch screen to the home screen and pushed on. I know that Robyn starts slow and then increases pace each mile so I set myself a little challenge: to hold her off for as long as possible. I overtook a few men (always good for the ego) and kept pushing on; I could tell that I was running faster than in the first race of the series. At the turn, I could see that she was close to me - within catching distance - so I put on a little spurt after the turn and overtook a couple more men. I was in second place at the moment which feels so much better than third. With a mile to go, I thought I had it...but no...with only 1/2 a mile to go, she drew level with me. 'Not a problem', I told myself. 'Just relax and let her do the work'. I sat in behind her and relaxed a little. It was actually quite a nice feeling not to be worrying about how close she was but to know where she was (not sure if that makes sense...sorry). I cunningly planned my attack. I knew where I was going to kick. I was visualising the moment: preparing for the victory (well, second place - the leader was way off ahead) when out of the blue, she kicked before me and before I was ready. Balls. Plans thrown out of the window, I pushed as hard as I could and tried to close the gap that had opened. Gritting my teeth I pushed for the line but didn't quite have enough to catch her. She had a fantastic finish beating my by 3  seconds. Well done Robyn - a great race!

Slightly disappointed yes, but when you put it in to context with the week I've had, it wasn't too shabby. My splits were more consistent than usual and my time 41:30 was quicker than at the last race.

Nothing for KD to be dissapointed with - a good race to bookmark a good week of training. I wasn't racing so I saw a gritty and determinded sprint finish - I think you'll have her next time!

I did my run early before work. 7Miles Gerneral Aerobic @ 7:34MM pace. Felt strong throughout and very smug with the pace.

The rest of the day that followed had way too many biscuits... and too much rain... I was staring out the window all day dreading the Towpath 10K (I help organise it) - but - as soon as I got on my bike and started cycling home, the clouds cleared and we had our window - the sun always shines on the Towpath :-)

After dropping the van back, I did a little 3 miles jog home. Couldn't do longer as I had a few appointments.

In the evening, it was one of John's friends 30th party. I was really looking forward to the occasion but wasn't feeling great. I was thinking back through what I'd eaten that day and there wasn't anything new or unusual in my diet. I put it out of my mind and headed out.

However, as soon as I arrived, I knew I wasn't well. I sipped a drink and tried to forget it but my stomach was cramping painfully. I knew that feeling: I'd eaten gluten. I'm still not sure what it was; possibly the diary milk buttons - they do say on the packet that they are at risk of cross contamination but if I avoided all foods that had that written on the packet, I wouldn't eat!

It didn't take long before I realised that I was going to/ needed to be sick. I actually felt a bit better after - I guess my body was just trying to get rid of the poison. Each time I was sick, I hoped that that would be it but, after another 30 minutes or so, the feeling would return and I'd go back to the toilet. 9 times in total I was sick and still I didn't feel better. Unfortunately, I was looking forward to leaving and couldn't wait to curl up in bed. It's bad enough feeling ill but even worse when you miss out on a fun night that you've been looking forward to for ages.

Over sleeping meant no parkrun :-( We did some errands and I banked 5 miles Recovery @ 9MM pace. A chilled day with feet up and lots of napping - subconsciously preparing for tomorrows long run!

No running for me today. Really frustrated as it would have been our first proper long run of the campaign. My stomach was feeling much better than last night but still cramping every so often. I also felt really lightheaded and dizzy and saw spots whenever I stood up - probably because I've not actually digested food for 24 hours. The problem is, if I eat, I'm worried I'll be sick again and if I don't eat, I won't re-gain any energy. I decide to spend the day resting, drinking water and eating a little bit when I feel I can. Luckily, tomorrow is a planned rest day. Hopefully I'll feel better for Tuesday's Eastville park 5k.

Tough leaving KD in her sick bed and I felt guilty throughout... but... I got my long run done. A relatively dry 14Miles at 7:30MM pace-ish - Boom! An awesome run where I felt strong throughout and really enjoyed it. My longest run this year and a great way to cap off week 1 of training - 50 miles for the week! 'T was a shame KD had to miss out but these things happen and I'm sure she'll bounce back and have  great week of running next week.

Usual plan for next week - try and up what we did this week by 10% or so!
As stated last week - we are loosely following an 18 week plan - but we are spending the first 6 weeks building our endurance before going into proper training mode and doing marathon pace based training sessions - which we plan to start doing with 12 weeks to go!

(Any radiohead fans out there? Radiohead have released all the OK Computer boot legs - 18 hours of archived recordings from live sessions and general recording in the studios - awesome! Online for a few more days - https://radiohead.bandcamp.com/ - £18 - worth every penny!)

Posted by Glutenfreerunninggirl at 8:36 AM