Racing the Severn Bridge Half with 8 Weeks To Go

Racing the Severn Bridge Half
8 Weeks To Go

Key:
Both of us - Blue
John - Orange
Kelly - Purple

Absolutely knackered from yesterdays 24 miles - legs are shot! Did a very steady run to and from work to try and loosen the legs. 5K @ 9MM Pace

I took a rest day today. I've really been feeling the benefits of having more rest days and giving my legs more time to recover. I did however spend the day with a friend and her boys visiting Wookey Hole - checking it out ready for a school trip in a couple of week's time. It's always surprising how much you walk during these day trips - should have worn my Garmin to step count! - the walking did seem to stretch my legs out a bit.

When to the dentist today to for a wisdom teeth check up - all good! Hooray!

My legs were feeling a lot better today so I ran to meet John at work at the end of the day. 6.6 miles and really nice to still be able to run together even when John isn't on holiday.

Legs finally starting to feel normal! Feeling a bit guilty having not done any speedwork yesterday but not going to try to catch-up in anyway, want the legs as fresh as possible for racing on the weekend!

I had a really busy day today with lots of summer tutoring and then I went into school to finish off tidying and sorting my new classroom. It's almost ready!

In the evening we went to running club and I really enjoyed a steady summer 8 miles at 8:05 minute mile pace.

Similar to Tuesday - 2 Miles into work - 6 Miles on the way home via Woody's - lending him my watch so he had the map for the Green Man Ultra he's taking part in on the weekend. Steady pace throughout - 8 Miles @ 9MM Pace

5 mile recovery run today at 8am before going into school for the last time this holiday. Nice and steady pace - 8:31mm average pace. Felt really easy; I was having to work hard to slow myself down. Hopefully that means I'm ready for the Severn Bridge Half on Sunday!

In the afternoon, I visited Jenny for a sports massage. She focused on my hamstrings, glutes and calves and also checked that my Plantar Fasciitis hasn't returned - which it hasn't, hooray! I have had a slight pain in the top of my hamstring since the Chester Marathon in November last year. It doesn't really cause me any problems but it doesn't seem to be going away. I've had to stop doing yoga because stretching it seems to make it worse. Jenny suggested that I try having some acupuncture on the area. I have to say, I'm pretty nervous about doing it. I'm not scared of needles but the idea of having lots of them in my leg is pretty worrying...I'm searching for advice so do comment if you've had acupuncture and it's worked ...or if you've had it and it hasn't...from what I've learnt so far, it seems that it can't do any harm so I'm quite tempted to try it...

Up early before working - 9 Miles @ 7:39MM Pace - DOMs gone and feeling fresh and raring to go. No need to feel guilty come lunch time - chips! I cycled to and from work today so as not to over-do it running wise. Last day of work as we are on holiday next week :-)

I was planning to run today but time just ran away from me. I finished off some planning, had a hair cut, visited my Aunty and Uncle and then had to go shopping to pick up some more shorts for our holiday to the Isle of Wight (forecast is 24 degrees every day!). I also needed to get some animal print fabric for my Stone Age role play area at school! By the time I'd finished all of that and got home it was pretty much time to go out to see Moby Dick performed on board the SS Great Britain. It was an amazing show and great to explore the ship while watching the action!

Rest day - ish - After running 365 days in a row last year I find it hard to resist any kinda streak if it's on... I did a very slow and steady 1 Mile to and from the shop just so my legs (brain) were (was) happy - 12 days in a row :-) We spend the morning chilling out and the rest of the day, basking in the sun with the Maestro whilst following Woody, Cat and many others taking on the Green Man Ultra! Tough conditions... not a cloud in the sky and the temp was at least 20Degrees+ throughout the day... I'll let KD talk you through it all with a bit more detail.

A fun day around Bristol cheering on our friends. We tried to sit down as much as we could but we did end up standing for a bit longer than I'd like the day before a race but it was great to support our friends Cat, Woody and Tom. We saw them in a field in Keynsham, at the top of Dundry Hill - where we found the perfect spot to support from...

And finally we went to the finish line to cheer them in. They were all fab but Cat did especially well finishing as 2nd Lady. 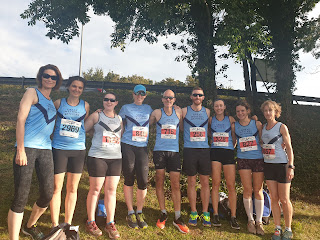 The Severn Bridge Half Marathon - 6th year in a row :-) Similar to yesterday - temperature was souring, not a cloud in the sky - not John-conducive-conditions. The weather and 9 weeks of OK marathon training - mainly focusing on endurance over speed - I didn't set myself too much of a target. I really wanted to bank 13 Miles at just under marathon pace.
Targeting 2:55-2:59 at Abingdon = 6:40-6:50MM Pace - I wanted to race averaging <6:30MM  throughout and finish feeling strong and as if I could keep going. The course is undulating but still quite fast - it's not a PB course but is very fun and scenic throughout. The first few miles were spent warming up, chatting and finding a good rhythm. The middle section was spent focusing on sticking to pace (and getting up and over the main major climb) and the final section I had to switch on and find some grit as I was starting to feel the heat and the fatigue of having run fast for the first time in a while. I crossed the line in 13th in 1:24:01 - 6:22MM Pace Mission accomplished! My second fastest time on the main course and I finished the race feeling strong and as though - if I'd wanted to - I could have kept on going. The rest of the day was spent re hydrating and over eating!

A hot race and John survived!...not even just survived, had a really strong race with a great time. Hooray! 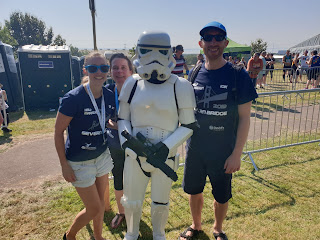 Similarly to John, I've not really ran fast for a while so wasn't sure how the legs would cope with 13 miles of speed! I was hoping to run an average pace of around 6:40. As I mentioned last week, for the last two years I have finished in 3rd and 2nd place so I was desperate to complete my trophy collection and finish as first lady!

It was a beautiful day and was so nice to be sat on the grass with our crew before the race. We got there nice and early so I had plenty of time to go to the loo a few times and relax...and eye up the competition!

I did a mile warm up on the bridge and then waited at the start with all the other speedy ladies. It's nice to chat to girls from other clubs and hear about their training. I know them all quite well so I realised that my 1st place goal wouldn't be easy. There was about 5 or 6 of us all capable of running similar times.

The gun went and we were off. Having done the race 5 times before and having spent quite a while analysing the course last night, I had a race plan. Susan from Weston AC to the lead pretty quickly. She was running at a really fast pace so I had a decision to make...do I try to stick with her and potentially burn out or stick with my plan. I felt pretty confident that she'd gone off too fast so I stuck to my plan and hoped I would catch her later. I was running with Tim from our club and Francesca from Clevedon for the first half of the race. I was feeling really comfortable - taking the uphills steady and picking it up on the downhills. After a few miles, the Maestro caught up with us and we ran together for a bit.

The main hill is at 7 miles and Francesca ran quicker than me up it and pushed on into 2nd place. My plan was  to take it steady on the uphill and to really pick up the pace after that. I was still feeling pretty good at mile 8 and enjoyed the downhill. I thought I might catch up with 2nd place but she was really motoring now and quickly disappeared into the distance.

I knew that the two Westbury girls wouldn't be too far behind me and I know the Robyn has an especially quick finish so I was keen to keep working hard. By this point, it was really very hot and I was starting to struggle. I was desperate to hold on to 3rd place so I risked a cheeky glance behind me at mile 11 and saw a Sophie only a few hundred meters behind me! My legs were really hurting now but I wanted that trophy...I hate coming 4th! I dug deep and tried to inject a bit more pace. I knew I wasn't as quick as last year when I was able to do a 6:11 mm down the bridge but I thought I might be able to sneak a sub 90.

With 1 mile to go I saw that the Maestro had slowed down. I wanted to catch him but my legs we pretty much empty. I was zig zagging across the bridge following the shade and couldn't quite catch him. The final few meters are up a really steep hill which, at that point in the race, feels like a mountain. A really kind guy running beside me could see that I was pretty much done and gave me loads of support for that final push.

I finished in 3rd place with a time of 1:31:12. Quite a bit slower than last year but, considering the heat, I'm happy with the run. I certainly couldn't have put in any more effort. My average pace was 6:56 so not too far off marathon pace. 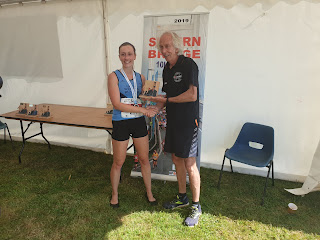 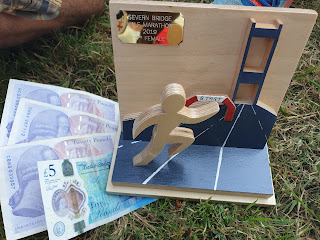 Tomorrow we are off on holiday to the Isle of Wight! Look forward to relaxing, exploring and perhaps a little bit of running! We have another race next weekend - the Oldbury 10. Hopefully it will be a bit cooler.

Posted by Glutenfreerunninggirl at 11:05 AM