Key:
Both of us: Blue
John -Orange
Kelly - Purple

Just a cycle to and from work today and no running. I did however pop to the dentist in the evening for a Wisdom Tooth check up. The dentist's exact words - all healing nicely!

Knackered - Just a 1mile run for me today - Home from work. Feeling DOMs-ed from the Satursday long run.

I wanted to do a 5 mile recovery run today and, being back at school, I've found I'm very tired in the evenings...it's hard to get back into the swing of work after 6 weeks off! So I decided to go out before work and get the run done. I went out at 5:45 and, to my surprise, it was dark! I've gotten so used to running in the daylight it felt quite strange. Gentle recovery run at 9:23mm.

Annoyingly, I had a meeting after work in Clevedon so I couldn't cycle today.

2 Miles to work and 3 miles home @ 9MM Pace - Legs still feeling awful.. With a big race coming up on the weekend I wasn't too upset about lacking in miles already on day two of the week - it probably made sense to cut back a bit - although it being forced upon me was a tad annoying!

Another day of no cycling as I had another meeting. This time in Yatton. I did run in the evening however. We ran to club and then did the first winter 8 mile route of the year. 10 miles in total at an average pace of 8:20mm. At one point, whilst chatting away, I looked at my watch and spotted that we were doing 7 minute miles without realising - always nice to slip a couple of speedy miles in without noticing!

2 miles to work and back home again @ 9MM Pace
10 Miles @ 8:20MM Pace which included running to club, the winter 8 route and running home.
Legs finally starting to feel slightly normal... nice to catch up with everyone at club and good to get reunited again with the winter routes and the Portway... ready in time for this weekends Bristol Half.

I was up early again today - in the dark again but this time I was ready for it! Another 5 miles, slightly quicker than Tuesday - 9:04mm legs are getting fresher ready for the Bristol Half on Sunday.

I also cycled today and stopped part way through to do my bit and answer a questionnaire for Sustrans.

2 Miles to work and 5 Miles home from work @ 9MM Pace
I've been using my work commutes to catch up on podcasts... I invested in a pair of bone conducting head phones... these allow me to listen to podcasts/audiobooks/music whilst still being able to hear other runners, walkers, cyclists and cars etc...

Marathon Talk - Episode 505 was a good one! A good interview with Aussie marathoner Julian Spence who has gone from 3:something to Sub2:15 over the course of 10 years. Also good to hear that Kenenisa Bekele could be back on the marathon scene and running Berlin in October (probably my fave ever athlete... 5K and 10K World record holder... 4th fastest ever marathon 2:03:03)

No running or cycling for me today as I had a sports massage straight after work. I was quite looking forward to having a rest day and hoped it would get everything feeling fresh ready for Sunday.

2 Miles to work and 4 Miles home from work @ 9MM Pace...
Legs stll feeling a bit rubbish and have done overall throughout the week... hmmm... Not filling me with confidence for Sundays half marathon...

Today it was our running friend Laurence's 100th Parkrun at Ashton Court. I wanted to support him but didn't want to run the day before the Half so decided to volunteer instead. My role was to use my best 'teacher voice' to ensure that everyone stayed in order in the finish funnel. 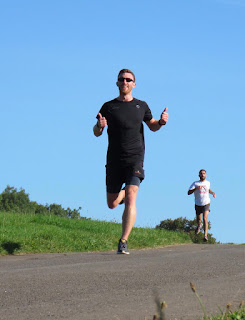 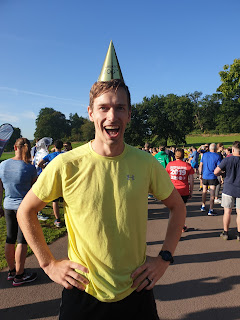 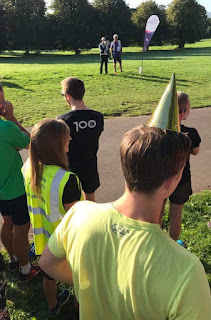 After some delicious Gluten Free Angel Cake - thanks Laurence, we walked home and put our feet up for the rest of the day.

5 Miles including Ashton Court parkrun. Was great to catch up with everyone and enjoy Laurence hitting the 100 parkrun land mark... was hard work keeping up with him and rightly so as he joined the Sub19 club with an Ashton Court PB! 9th Place with 19:10 for me... probably a little quick the day before a race but I felt reasonably comfy throughout... bit of a confidence boost legs wise after them being miserable all week...

Today was the Bristol Half Marathon. After a solid 7 hours sleep, I woke up feeling refreshed and ready to race. The best thing about this race is that we can walk to the start in 10 minutes so it was a nice relaxed start to the day. 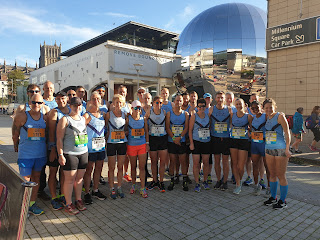 We met the rest of our club for an obligatory GWR club photo before doing a mile to warm up and then entering our pen.

Both John and I were in the same wave right at the front so we didn't have to worry about it being too crowded. Eventually, the gun sounded and we were off!

I'd buddied up with Catie and Rob who were planning on running the same pace as me. Dr Dave was planning on joining us too but clearly we were too slow as he stormed past us at mile 2! The first few miles went to plan. I was working hard to hold the pace but it felt alright. After about 6 miles, Catie dropped off as did Rob so I tried to tuck onto a couple of other groups and keep the rhythm going.

At halfway I felt alright. My pace had dropped a little during some of the uphill miles but I was still on for a good time and possibly a PB. I was trying to keep it going but getting hotter and hotter. At every opportunity, I threw water over my head and tried to cool myself down. Mile 9 is where it really started to get hard.  The course got very twisty and turny and I couldn't pick the pace back up on the short straights after slowing for the turns. What was nice is that lots of my fellow GWR runners were passing me ...slightly annoying but nice to see friendly faces and get some encouragement. Actually, the whole course was full of encouragement. I saw so many people I knew and was constantly being cheered on by shouts of 'Go Kelly!' -thank you everyone - it really made a difference. 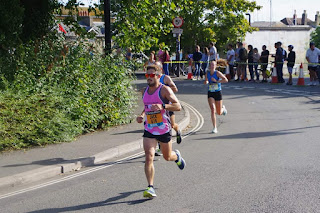 I realised around mile 10 that I wasn't going to get a PB today. I re-evaluated and decided to focus on getting a sub 90. In hindsight, this was probably the point that I let myself slow down. If I'd really wanted to, I probably could have pushed on. But I think it's harder to be motivated when I'm way down the field with at least 20 girls ahead. If it was a smaller race and I was in with a prize, I probably could have found something...

I did a couple of slower miles (7:21 and 7:22) when I noticed that my running form was horrible. I stood up straight, leaned forwards and managed to do the next mile in 6:55. By this point I was very hot. I only had 1 mile to go and I had 10 minutes to do it to get a sub 90. It was just a case of pushing to the finish. 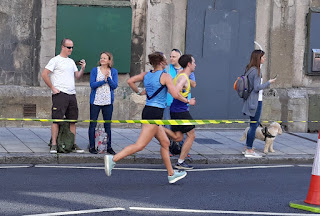 The last mile always catches me out. Unlike the 10k, where you go around the center and right to the finish, the race in the half takes you - pointlessly- up a HUGE hill ....well it felt huge...and then back onto the finishing straight. The hill seemed to go on forever and by this point I was just looking forward to stopping. In the last few meters I saw that I was close to sub 1:29 so put in a last little sprint to just tuck in at 1:28:55.

Not a PB but not bad for a hot day on a hillier- and- twistier- than- I'd-remembered-course!

I definitely have a problem with my left leg. It didn't massively slow me down but it didn't feel great. The area that was dry needled last week felt a lot better so I've booked in to have a bit more of the leg done. Hopefully I can get it feeling better in time for Abingdon.

Hmmm... 1:26:52... Not what I'd planned... After 10+ weeks of decent marathon training, a half marathon time earlier in the year of 1:26:07 (off of no training) and a 10 Mile race time of 59:46 only a fortnight a go - I had big plans... I wasn't expecting anything near PB pace (1:17:15 = 5:54MM Pace) but I did rather fancy something around or under 1:20 or 6:06mm pace... 3 Miles in and on paper things looked like they were going to plan... mile splits of 5:58, 6:01 and 6:05 but... I felt HORRENDOUS... my legs felt like concrete blocks, blocks with steel reinforced rod going through them... heavy and far from flexible... it was warm but we were in the shade throughout the first half... I made some changes to my game plan... I feel experienced enough nowadays to know when it's just not going to be my day... I felt that I'd slow down to marathon pace - 30 seconds slower at 6:30MM pace and try to enjoy the rest o the race whilst still banking a training session of sorts... the miles ticked by, not terribly uncomfortably but I never quite found my flow or any sort of rhythm.. 10 miles flashed up on my watch and I'd had enough... it took all my might to concentrate on just getting the race done and trying not to get overtaken by the ever closing KD... with a mile or so to go - 2 GWR club vests overtook me... Mike looked like he was jogging past me as he checked I was OK and Gary's humorous and pitiful slap on the arse was a little more embarrassing... finally I crossed the line.

I spent the rest of the afternoon pretty annoyed with myself.. thinking about retiring from running and taking up other sports; maybe archery or orienteering... I really feel I'd let myself down today and that my training hadn't given me the karma I felt I deserved... 6 pints later and I'm maybe feeling a bit differently... It was a bad day. These things happen - I feel that I know this more than most! On the flip side, when I scroll through my Power of Ten and my Strava - I realise there has been so so many good days - again - more than most! Better a bad day today than at Abingdon in just 6 weeks time! Onwards and upwards... 3 weeks of proper marathon training with another blitz at a half marathon race and then a decent taper to take me to race day.

Well done to everyone who took part and a genuine and sincere thanks for all of the shout outs (and photos taken) along the way - when you're having a bad day it does make it all that bit easier. 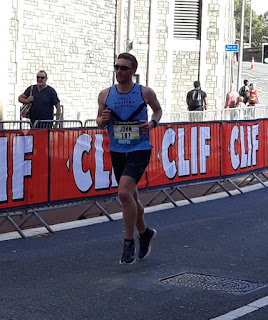 Total for the week:

Posted by Glutenfreerunninggirl at 12:27 PM