Both of us - Blue
John - Orange
Kelly - Purple

We haven't blogged for a couple of weeks as we've both been feeling a bit anxious about our marathon prep. You may be familiar with the term 'Maranoia' which is fear of being under prepared as the marathon draws closer. Maranoia really does sum up how we've been feeling...we are used to having doubts as race day encroaches however, this time, I think the doubts might have some legs...

Our training this summer has been rather...relaxed and we're both wishing that we'd done a bit more to prepare. Neither of us really feel that we're in as good shape as we've been in the past...which doesn't bode well when you want a PB. We had one last opportunity to test out how marathon-ready we were - the Kingston Half Marathon.

One of the reasons I've not blogged for a while is because I've had a cold didn't really run much last week other than a steady 16 miler at the weekend. I've also been feeling a bit fed up with this niggly hamstring. It's not got any better and might actually be getting worse...I've tried resting, dry needling and lots of massage but can't quite shake it. Jenny, my physio, think's it might be hamstring tendonitis which is when the top of the hamstring that joins to the glute is inflamed and has micro-tears. This, annoyingly, takes a longer time to heal than other hamstring issues.

I had a pretty restful week with the aim of having a successful final race before Abingdon. I've cycled to work every day which I'm loving.

On Saturday, we went to Bushy Parkrun as it was the 15th anniversary of parkrun. We ran with my sister for her 2nd parkrun - she enjoyed this much more than Ashton Court and its hill... 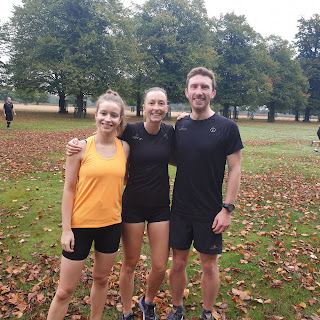 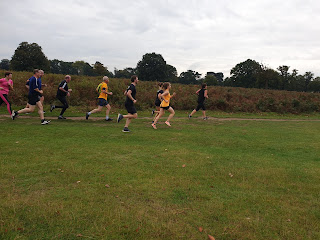 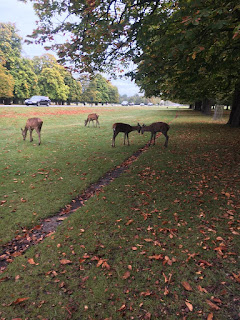 As we're only 2 weeks out from Abingdon, we decided to run this at just under marathon pace as a confidence builder. We're slightly worried that we won't be able to maintain the target 6:45 pace for 26.2 miles so we hoped that today's race would put any doubts aside.

While John decided to run to the start, I opted to drive in with my Dad. I had the sort of morning where everything just seemed to go right. We arrived in the car park and were ushered straight into the closest space. Then we walked to the start and en-route I spotted a row of empty portaloos! Surprised by this unusual occurrence, I jumped straight in - feeling rather smug. When I came out, I noticed that there was in fact a (very large) queue at the other end...but in my defense, the people queuing hasn't noticed all of the empty ones. To try and make up for my shameful queue-jumping, I went down and told everyone about my discovery.

With 20 minutes until the start, I dropped my bag and went to warm up. 1 mile along the river in the sun - glorious. Legs felt pretty good. I did a few hundred meters at MP and it felt alright. I was ready. With 7 minutes to go, I popped into the front of the pen and was joined, within seconds, by John. Perfect! I was feeling great and ready to go.

The first few miles went around the center which meant that my GPS wasn't accurate. This stressed me out a little as I really like to know what pace I'm doing. After a very twisty first mile, the sub 1:30 pacer came past. This really surprised me as we we should have been ahead of him. Often, pacers are followed by a large group so, not wanting to get caught up, John and I picked up the pace a bit and pushed on in front. John was running really comfortably but for some reason, I couldn't get into a rhythm. It might have been the twisty route or the frequent dodging of puddles or curbs - I'm not sure. All I know is I didn't feel right. John and I would be in line one minute and then I'd drop back without meaning to and I really couldn't pick up the pace to get back to him. Again, I think I felt quite tense and anxious. I started worrying about the pace dropping (which again could have been to do with the route or GPS) and my mind was stressing about the marathon (If I couldn't do 6:40s for a half marathon, how was I going to keep it going for 26 miles). I could also really feel my hamstring hurting. I wanted to put on a little spurt to reach John (who was, once again, a little way ahead) but I was worried about putting extra stress on my hamstring.

After 4 miles, my pace was dropping, I was feeling stressed about my pace and about my leg and worried about not being able to recover in time for the marathon. I felt like I was doing more harm than good. I had to decide what was more important - this race or the marathon. I knew I'd see my dad and sister at mile 5, so I decided that, when I saw them, I'd pull over and stop. This decision happened pretty quickly as they appeared before I'd had much time to really think it through. I stopped, removed my number and manage to tell John to keep going and not to worry about me.

We walked back to the start so I could collect my bag and there was a massage company waiting for the runners to finish to offer free massages. I made the most of this opportunity and got a free massage which really helped. We then went to cheer on John who did brilliantly and was looking really strong.

So I'm left feeling a bit deflated and wondering if I gave up too easily - especially as the finishers T-shirts were really nice and they had XS (for once) and the goody bag was all gluten free! I've never DNFed before and it's really unlike me to give up like that. I could really have done with the confidence boost of a strong 13 miles at MP as I'm now left worrying that I won't be able to achieve my target. Part of me definitely wishes that I'd kept going but I think I probably made the most sensible decision as my main goal is the marathon.

I now have 2 weeks to recover. I've booked in a dry-needling session and I'm going to have a good few days rest after that to let it have the most effect. I'm not sure if I'll be able to reach my goal at Abingdon. I'm not sure I've done enough training for Sub 3 and I certainly haven't done enough miles at marathon pace. I'm not even sure I'll be able to finish...It could just be the disappointment after today's DNF or it could be maranoia...all I know is, that I'll do as much as I can to get myself recovered and I'll give it my very best shot. 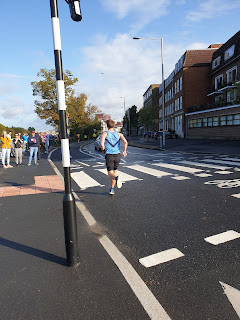 A good weekend of running for me! Lush to spend time with the Dicks family as always - well looked after and very good company. On the Saturday, being in London meant that we were able to attend parkrun's birthday at its place of birth! I left early to bank some extra miles by running to Bushy Park - 5 very flat and mostly pretty miles later I arrived at the already very busy briefing. I had some time to kill so did another mile in the park. Racing the next day, Dicks1, Dicks2 and I took it steady throughout and really enjoyed the excitement of the 15 year anniversary and all of the people around taking part. Dicks2 even managed a PB - well done Amy! A chilled afternoon followed - watching the athletics with unnecessary carb loading...

Sunday, 5:30 and the alarm goes off... urghh.. KD likes to have her breakfast 3 hours before the race... I think 2 hours is fine but she's the boss... Toast and jam for KD and a bowl of porridge for me... Back to bed for an hour of napping and watching New Zealand v Namibia... At this point, the rain is hammering down outside... :-(

An hour or so later and we're up and about getting changed into race gear. No sound of rain - Yey! Similarly to yesterday, I was keen to bank some extra miles so I ran down to the race start. 3 Miles later and I'm at the start in plenty of time - one more mile of running before getting in the start pen with KD.

Race conditions were unexpectedly perfect; clear skies, nice temp with a slight breeze. Starting and running the first few miles in and around the town was lovely - a few tough turns but nothing too stressful - I thought we were plodding along nicely... As we were coming to the end of the loop around the town - mile4 - it appeared that KD was struggling to keep up (we'd planned to run together at around about marathon pace.) At the time I didn't think too much about it and knew we would be seeing KD's sister and dad shortly so thought to myself that would encourage her to pick up the pace and we'd soon be running together again. I was half right - KD had sprinted to catch up to me but only to tell me that she'd have to pull out the race! She assured me it was nothing serious and gave me the OK to carry on and wished me luck. By this point - 5 miles into the race - I was very much in my stride and enjoying the run. We crossed the Thames and took the towpath for a couple of miles from Kingston towards East Molesey in the direction of the Scilly Isles. The race was pancake flat throughout and all on tarmac so no excuses whatsoever. The miles ticked over nicely and at 8 miles we took a turn and made our way back towards Kingston. More flat and fast tarmac on the cycle path.
Having run 4 miles before the race - with just 3 miles to go, I was starting to feel a little tired at this point and found myself actually running a little too fast. I reminded myself that today was a workout and not a race... the plan was not to get to the finish as fast as possible but as comfortably as possible whilst running marathon pace - strange aye! With just less than a mile to go I was reunited with KD and family again - massive cheers followed which was just the boost I needed to get me to the finish.

A tough day for KD and a hard pill to swallow in regards to doubt regarding whether or not we have trained hard enough to achieve the overall goal of Sub3. Personally I agree with KD - I don't think we're in the shape it takes to run a Sub3 - but - I'm not particularly fussed about it. When I did it back in 2016, it was off the back of 4 consecutive and very positive marathon training campaigns. This is our first one back after a year off proper marathon training. For once I'm having to be the positive one in the relationship... It really doesn't matter what we achieve in Abingdon in a few weeks time. What's more important is that we're happy and healthy and able to take our experiences from this campaign into the next one and look to improve where we can. Whatever KD achieves in a couple of weeks time I'm proud of her and know that she's capable of Sub3 and that it will come when the time is right.

Posted by Glutenfreerunninggirl at 9:01 AM