Key:
Blue - Both of us
Kelly - Purple
John - Orange

I usually start the week with some strength and conditioning work but my usual PT session was cancelled so John and I did some squats and lunges at home using his resistance bands.

I cycled to the Victoria Rooms on my way into school to check it out ready for a Science Challenge I'm organising so I ended up with 9 miles of cycling for the day.

It's mental health week so I also did lots of yoga in school with the kids today.

Great progress today... Inspired by last weeks successes I decided to go for a run for the first time on a Monday in months - this lead to my longest streak in a while as well - 3 days!

Up early doing the (now) usual strength session with some stretching followed by a steady 5K blast round the block.

I cycled to work again today. Then, after school, we had staff yoga. I was clearly tired as I fell asleep during the final relaxation!

In the evening, I went to the Bristol and West track session. On the menu today was a pyramid of 1500m, 700m, 300m, 300m, 700m, 1500m. It was pretty hard work but I managed to keep all of my efforts at sub 6mm pace. There was another girl in my group who was a similar speed to me so we pushed each other which really helped.

On the way home, I ran to the pub to meet John and Luke for a drink and dinner - best way to recover!

Keeping the streak going... 4 days now! Did last weeks hill session again. Headed over the Bridge Valley Road - roughly half a mile from bottom to the top with 20-or-so lamp posts evenly spread. Effort 3-up - recovery 1-down - all the way to the top. Improvement on last weeks effort: 6:53 Vs 6:58 - marginal gains! After the warm up and doing the workout I was feeling confident and so decided to add a few extra miles to the usual loop - the weather was lush and the sun was just starting to poke it's head up around 6:30 and I ran into Ashton Court - it's been so long since seeing Ashton Court and taking on the big hill! My injury prevented me the most from properly going down hill so this would be a proper test! Just over a mile with a drop of 100+feet - success - hip, ITB, Knee etc held up well! A good run and a great start to the day.

A really great running day today. Decided to join the 10 mile group tonight. I wasn't sure how my legs would feel after the efforts at track yesterday. However, surprisingly, I felt great! Happily chatting away and didn't even realise that, at one point, I was running at marathon pace! I ended up running my 2nd fastest time on that route. A great confidence booster but I hope I haven't ruined my legs for cross country on Saturday.

Club night and my 5th day of running in a row... Running has caught up with me... On the back of the last few days successes, I had briefly contemplated my first 10miler of the year... reigned it in a little and decided it was more sensible to run an 8miler... couldn't be arsed with that either so just ran a really lovely, steady, chatty 4miles with a big group - lush and just what I needed. No injury, no stress and a good time to stop and have a couple of days off now.

Up at 5:45am for a 7 mile recovery run this morning. Felt super easy and had to keep reminding myself to slow down. I wanted to keep to 9mm pace to give my legs a proper recovery before the weekend.

I also cycled to work which ended up as 6 miles total for the day.

In the evening, John and I went to Hatha yoga. This was a step up from John's usual Yin yoga which is much more gentle. I always love doing classes together but it was especially good to do something more challenging.

Day off from running for me. The last few weeks I've been going to a Yin Yoga class. Really relaxed and steady and very beneficial I think to getting stronger and fighting the injury. Feeling a bit more confident the last couple of weeks I booked in with KD to do the slightly more difficult and enduring class that is Hatha - a lot faster paced with much more technical stretches - I got through it - just about - I felt great benefits from having done the class - definitely a step up in effort though!

I had a bit of a lie in today as I was on a course which didn't start until 9am. This was great as I could do my run at 7am which meant it was light! Another 7 mile recovery run and all felt good.

Another rest day from me - other than the daily strength workout routine and the usual cycle to and from work - very little exercise to report on from me.

Cross country today! It was extra nice as firstly, it was a beautiful day and secondly, it was in Chepstow so only a 30 min drive away. Sadly, we didn't have a full team of women which means it's pretty much guaranteed that we'll get relegated but I tried not to let that have an impact on my race. 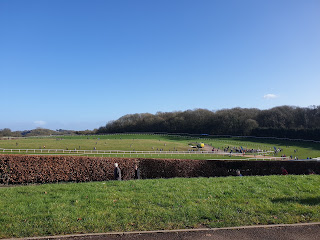 When we arrived, we walked the course; it looked really good. A few short, sharp hills but then some lovely, long downhills. It wasn't muddy either and the grass felt really nice to run on. I was looking forward to getting started.

I planned to try and run strong but not worry too much about speed and position as my focus was on the marathon. However, all of that went out the window once we got started! I got off to a great start and felt really good so decided to push on for a good position. I've not really had any particularly impressive cross country performances yet this season so when I realised that I was pretty close to the top 20, I really pushed on and picked up the pace on the downhill sections. I managed to overtake a few people and finished really pleased with a 22nd position - my highest for this season. My average pace was 6:57 which I was pretty please with too. 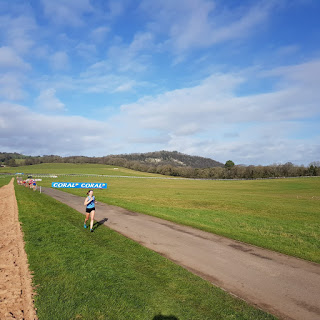 In the evening, I went to a work colleague's party. The food was AMAZING and after being on my feet all day, I really tucked in! As I new I had a long run to get in the next day, I decided against drinking and drove instead- running dedication! 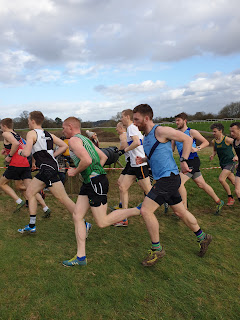 Back racing! Cross Country in Chepstow. Awesome setting and course. Fast, not too technical but a little bumpy at points. Perfect underfoot - soft, but not boggy. Went out with good intentions with a plan to try and hold a similar effort to last weeks parkrun. Feeling a little bit coldy, heart rate reflected this. Working hard throughout I kept the pace respectable. A long way of proper race pace but still nice to maintain a proper effort for 30+ mins with no knee/hip pain whatsoever. 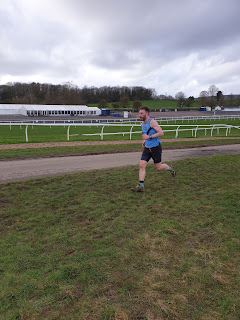 I wasn't sure how I'd feel after cross country so I'd planned to do a slow 20 miler. John had planned to meet up with Sam and James so I decided I'd tag along and probably plod along a bit behind them. As it happened, my legs weren't actually feeling too bad. I took the first few miles steady and let John and Sam run on ahead but, at the 5 mile point, when John turned around, and the ground flattened out a bit, I found that I was able to keep up with Sam and ended up with 20 miles at an average of sub 8mm pace! We were expecting a rather more challenging run what with the storm but it wasn't too bad; a bit of wind and a few showers...until the last 2 miles when the wind really picked up and the rain started to get heavy.

Really pleased with today's run after all the faster miles I've done this week. I really feel like marathon training is working.

Apprehensive about this one! Planned at the start of the week to run my first 10-miler of the year but wasn't gonna put too much pressure on myself and wanted to make a decision on the day. Still feeling a bit coldy I was a little put off... but... after a strength session and some stretching, my legs were feeling pretty good. KD & I met up with Sam at the start of the B2B cycle path. We did the right thing choosing the path as it's well sheltered and we probably had the best conditions available without being on a treadmill inside. Legs felt great and we were ticking off the miles at a decent pace. We got to 5 miles out and I was feeling good - but sensible - I said goodbye and turned around for home. I made sure throughout to test myself but making sure to not go too fast. Trying to hold a good technique throughout the run. It was awesome! Was so nice to hit double figures! I finished the week with my longest streak of 2020 = 5 days. My biggest miles = 32 and my longest run = 10miles! Great Progress!

32 Miles total for the week!

Posted by Glutenfreerunninggirl at 12:57 PM